Materializations is a response to a commission / acquisition, where I was invited to rethink the installation From Hand to Mouth (1993) as a new series of 24 individual images.

Long before the darkroom performance that resulted in the original large-scale continuous installation photograph, a set of experimental test prints was produced from enlargements of negatives placed directly in my mouth, an ad hoc camera obscura. These intermediary artefacts are evidence of a moment of trial and error wherein the mode of address was not yet public, registering the solitary process of technical problem solving, grappling with ridiculously over-exposed negatives, and searching for suitable parameters enabling the revelation of enigmatic and never seen-before apparitions.

Upon returning to this corpus while working on the project Media Mediums, a filiation became apparent between these now-distant photographic investigations, images literally mouthed from the site of spoken language, and a multitude of spirit protocols in which the photographic medium was leveraged indexically as a proof of concept of the continuousness of this and other worlds.

The improbable representational logic at work, a body imaging itself and objects touched as thought-forms, is contiguous, obliquely or even invertedly, to a range of supranormal occurences, from diverse manifestations of “thought photographs” to the contingent coalescence of fluidic particles in ectoplasmic, teleplastic and ideoplastic phenomena studied under experimental conditions by turn-of-the-century mediumistic researchers.

The twenty-four prints that make up this series are exact full-scale digital duplicates of the original analogue test prints printed on a white background. Many thanks to Franck Bordas and his digital printing wizardry. 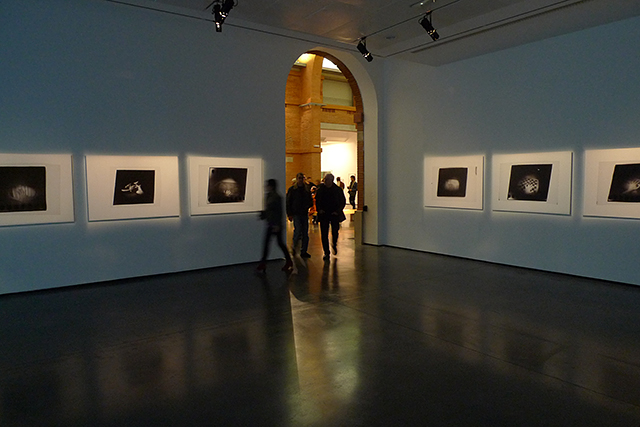