"Once the technological differentiation of optics, acoustics, and writing exploded Gutenberg's writing monopoly around 1880, the fabrication of so-called Man became possible. His essence escapes into apparatuses. Machines take over functions of the central nervous system, and no longer, as in times past, merely those of muscles… For mechanized writing to be optimized, one can no longer dream of writing as the expression of individuals or the trace of bodies. The very forms, differences, and frequencies of its letters have to be reduced to formulas. So-called Man is split up into physiology and information technology… Thought is replaced by a Boolean algebra, and consciousness by the unconscious, which (at least since Lacan's reading) makes of Poe's 'Purloined Letter' a Markoff chain. And that the symbolic is called the world of the machine undermines Man's delusion of possessing a 'quality' called 'consciousness,' which identifies him as something other and better than a 'calculating machine.' For both people and computers are 'subject to the appeal of the signifier'; that is, they are both run by programs. 'Are these humans,'' Nietzsche already asked himself in 1874, eight years before buying a typewriter, 'or perhaps only thinking, writing, and speaking machines?'"

Kittlerbot is a program that operates 24 hours a day, diligently applying a system of Markov chains to Kittler's opus, Gramophone, Film, Typewriter and many other of his texts so that every minute a fresh tweet is broadcast, a continuous flood of novel aphorisms in the trademark Kittlerian style. 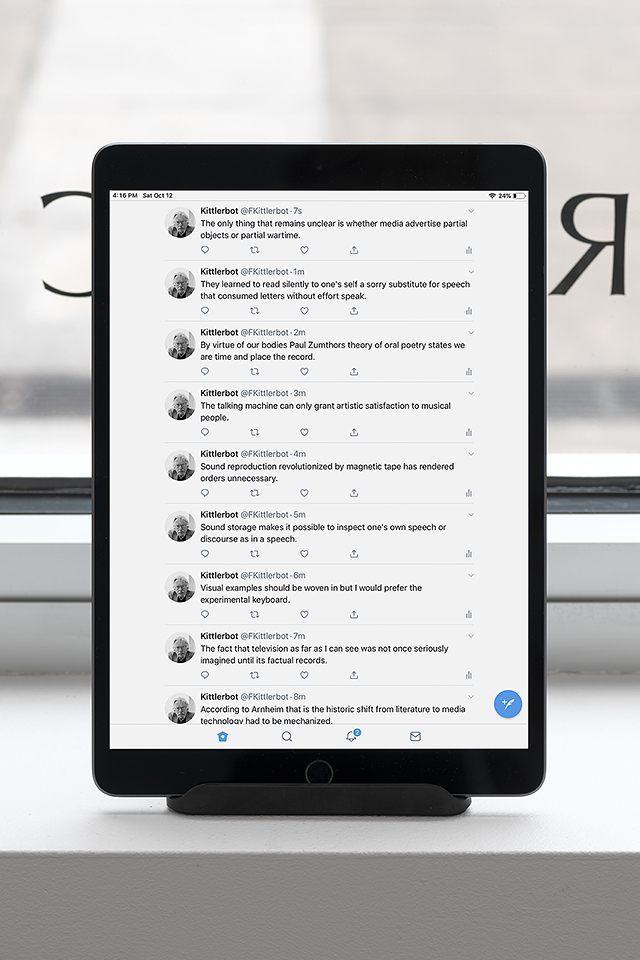